Last night about ten o’clock the concierge at Enchantment Resort in Sedona, AZ called me. She put me in contact with her guest who said “my front crown came off”.  We saw him the following morning, and he walks into the office with a big smile and a missing front tooth! What the patient thought would be a simple appointment to have his front crown recemented was not what he needed. Instead he had a broken front tooth! 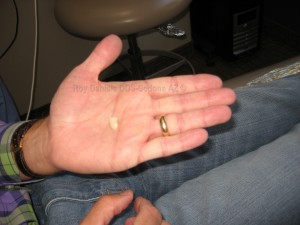 It’s never a good day when your front tooth is in your hand ! 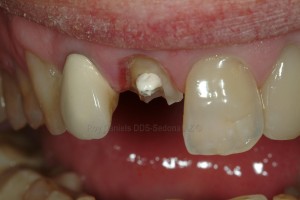 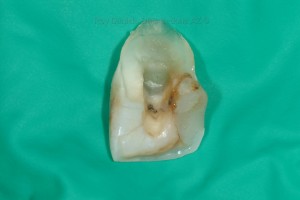 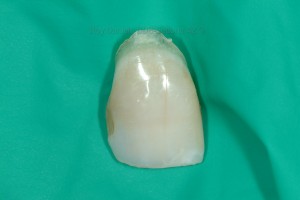 Fortunately, the patient had saved the fragment of tooth (he almost forgot to bring it to the dental appointment, and had to return to get it) and it was “bonded” back into place so that he didn’t have to walk around without a front tooth. 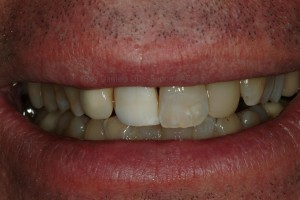 The front left tooth immediately after it was bonded back into the correct position. The tooth was out of the mouth the previous evening, and is dehydrated.

Our Protocol for repairing his broken front tooth:

1. We always take an x-ray to make sure there isn’t anything hidden inside the bone.

2. We check to make sure that the tooth is restorable, In this case it was.

3. The tooth is inspected carefully under magnification to see if there is any decay that the x-ray did not detect, and we evaluated the existing tooth structure remaining.

4. The existing tooth and fragment were cleaned and micro-etched to improve the bonding and retention.

5. A “dental dam” was placed to isolate the area from contamination with saliva and moisture.

6. A “cord” was placed because the gum wanted to bleed slightly and contaminate the bonding. Because the tooth had been out of the mouth overnight, the gums tightened over the area and part was slightly inflamed. We used a little local anesthetic to control the bleeding.

8. The bite was carefully checked to make sure that it didn’t have too much pressure to dislodge and fracture the tooth again.

9. Finally, the patient was given a prognosis and told to follow up with his dentist as soon as he returns home. Hopefully, he will enjoy his time in Sedona and not be visiting dental offices in Sedona during his stay!

We are open and following the recommendations of the CDC and American Dental Association!