Aggressive Toothbrushing is the #1 Cause of Sensitive Teeth 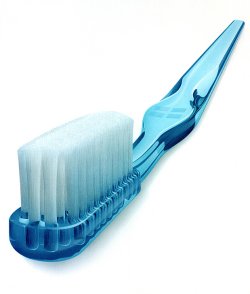 One in three dentists say that aggressive toothbrushing is the most common cause of sensitive teeth, according to a nationwide member survey conducted by the Academy of General Dentistry (AGD). Acidic food and beverage consumption was found to be the number two cause.

Sensitive teeth, or dentin hypersensitivity, is a common oral condition affecting approximately 40 million Americans of all ages. It is characterized by discomfort or sharp and sudden pain in one or more teeth and is often triggered by hot, cold, sweet or sour foods and drinks, pressure on the tooth, or even breathing cold air.

According to Van B. Haywood, DMD, aggressive toothbrushing and consuming acidic foods and beverages can lead to tooth sensitivity. This is because over time, they can wear down the enamel on your teeth and even your gums. â€œWhen the protective layer of enamel erodes or gum lines recede, a softer tissue in your teeth called dentin can be left exposed,â€ explained Dr. Haywood. â€œDentin connects to the toothâ€™s inner nerve center, so when it is unprotected, the nerve center can be left unshielded and vulnerable to sensations, including pain.â€

While aggressive toothbrushing and acidic foods and beverages were found to be the most common causes of dentin hypersensitivity, the survey also revealed several other factors that can cause tooth erosion and contribute to the oral condition. These factors include certain toothpastes and mouthwashes, tooth whitening products, broken or cracked teeth, bulimia and acid reflux.

Out of the nearly 700 general dentists who responded to the survey, nearly 60 percent say that the frequency of tooth erosion has increased compared to five years ago. â€œBeing able to detect tooth erosion in its early stages is perhaps the most important key to preventing dentin hypersensitivity,â€ said Raymond K. Martin, DDS, MAGD. â€œDiscoloration, transparency, and small dents or cracks in the teeth are all signs of tooth erosion and should be discussed with your dentist as soon as possible.â€ Fifty-six percent of dentists surveyed say that patients manage tooth sensitivity by avoiding cold foods and beverages. Another 17 percent say that patients avoid brushing the sensitive area of the mouth. â€œWhile these may seem like the quickest and easiest ways to prevent sensitivity, none of them will actually solve the problem,â€ explained Gigi Meinecke, DMD, FAGD.

For those who are already affected by sensitive teeth, the AGD recommends these actions to help alleviate symptoms: